Tandoori masala is a very well known masala in the subcontinent of India, Bangladesh, Nepal , Pakistan and Afganistan. People of these regions love  to eat tandoori food items. And most of the tandoori foods are made by marinating with this tandoori sauce or masala paste. 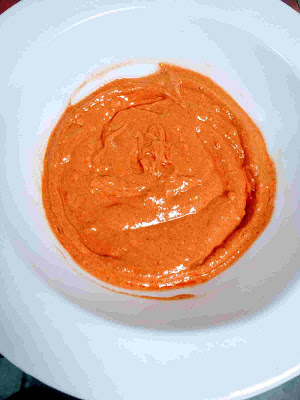 To make this masala you need Kashmiri chilly paste.  Without this chilly paste you cannot get the red colour like the one you get in restaurants kababs and tikkas.

In India we make this masala as a paste with hung curd or thick yoghurt. All the ingredients are mixed with the curd. Mustard oil is another important ingredient for a authentic tandoori masala paste recipe.

Steps to make this paste

The most important ingredient is the curd to make the masala. And it should  preferably be a hung  curd , overnight hung curd is perfect. There should not be any excess water in the curd.
First take a mixing bowl and add the hung curd. Then add ginger garlic paste, kashmiri chilly paste, cumin powder, garam masala powder, turmeric powder, salt, chat masala, black salt, black pepper powder, cooking oil, mustard oil and lemon juice.
Now whisk everything together nicely so that the masala paste become smooth.
Check the seasoning of the masala paste.
You can also add Vinegar instead of lemon juice. Mixing properly using a Whisk is important as every ingredients should mix properly.
In place of mustard oil you can use cooking oil as well but mustard oil gives a nice flavour to the resulting dish after cooking.
This is how you can make a tandoori masala paste to cook most of the kabab and tikka.
Now its ready the Tandoori masala also known as Tandoori Red masala. 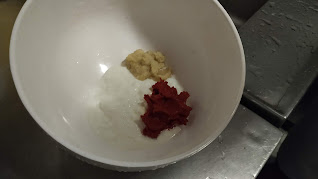 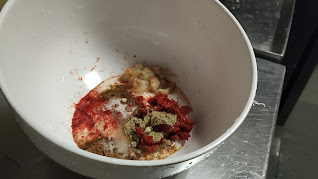 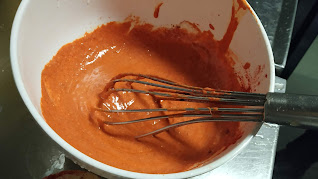 These foods are cooked basically by a traditional cooking method, the most popular one is ovalclay charcoal tandoor.

You can read some delicious recipes made by using a charcoal tandoor.
Tandoori food items are very tasty and healthy as foods are prepared using open fire. Less amount of oil is used to make them and the food get cooked in its own juice.

Tandoori foods are Crispy, juicy and very soft in texture. So to make a perfect and tasty  tandoori food items , you need a perfect Tandoori masala.

Uses of this masala paste

Tandoori masala is a mix of spices used to marinate tandoori food's. Commercially it comes as a dry powder but at home or in restaurants you can make it as a masala paste with yoghurt.

Ingredients
How to make the recipe