Egg bhurji is a popular eggs recipe that can be made within 15 minutes and have a delicious breakfast, lunch or dinner.  If you have to make a quick meal preparation then I am sure this is perhaps the best recipe you can make so quickly.

This recipe will give you one of the best egg bhurji recipe that you can make at home at the comfort of your kitchen. Read this bhurji recipe with step by step instructions and video. 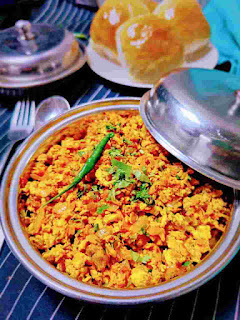 What is egg bhurji

Egg bhurji also known as Anda bhurji in Hindi is a spicy version of scrambled eggs. Lightly beaten or whisked eggs are scrambled in a spiced tomato onion based masala mixture.

Hugely popular in Mumbai Streets as a bhurji Pav.

Eggs : 4 to 5 depending on the amount of bhurji you are making.

This popular bhurji can be prepared in many different ways. Most popular are

In dhaba style, onions are sauteed to light brown color. Garam masala powder or pav bhaji masala powder is used to give it the unique flavour. Some finely chopped capsicum is also added which is optional, you can escape to add in the bhurji.

Serving suggestions for egg bhurji
This is a nice side dish that goes well with any meal of the day.
For breakfast, slices of white or brown breads either toasted or plain are a good choice with it. I usually prefer to serve pan toasted Pav with it.
For lunch or dinner, you can take some Indian flat breads like tandoori roti or butter naan. But some homemade phulka or chapati goes extremely well with this egg bhurji.

Take a mixing bowl and break the eggs one by one carefully.

Add a small pinch of salt and beat the eggs with a whisk nicely untill become fluffy.

Fry the onion and tomato

Heat a non stick pan with some cooking oil over medium heat flame. When the oil become hot add chopped onions and saute.

Then add chopped ginger and green chilli. Saute them till the onions become soft and translucent.Don't fry the onions to become brown.

Add the chopped tomatoes and fry till become soft and messy. For dhaba style bhurji add some chopped capsicum at this stage.

Now add the spices turmeric powder, red chilli powder and pav bhaji masala powder. Lower the flame to low and cook the masala for one minute by stirring.

When the masala are nicely cooked pour the whisked eggs and start to scramble. Keep the heat to low for one more minute.

When the eggs get nicely cooked switch off the flame and then sprinkle some fresh chopped coriander leaves and give a final mix.

For a soft egg bhurji just cook the bhurji untill just set. Many prefer a soft bhurji or gila bhurji.

Remove and serve hot with your preferred breads or rice.

How to make this bhurji street style

In street style egg bhurji recipe in addition to given ingredients, butter is used to enhance its taste.

You can add 1 tablespoon of butter along with cooking oil at the beginning of the recipe or just before removing the bhurji add the butter and cook for one more minute.

You can use boiled eggs to make egg bhurji as well. If you have some leftover boiled eggs then I am sure this is the best things you can make with them. You just need to make the masala as described above and mixed the eggs.

You can cut the eggs into small bite size cubes or slice them to use in the masala. My wife often make boiled eggs bhurji, she only use the egg white and cut them into slices then mix with the masala. And it is best to serve with chapati and phulka. And also work with dal and chawal as a side dish.

If you love egg bhurji recipe then I am sure you would love to try the following recipes as well. 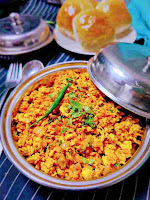