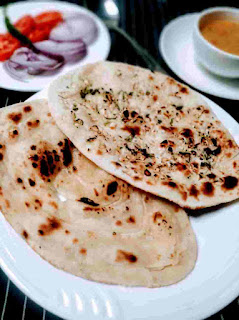 Before we jumped into the recipe let's know some facts about the Naan.  Many believe Naan like kababs that came from Persia, was developed by Persian and the Mughals
However the first recorded history of Naan found in the notes of the Indo-Persian poet Amir khusrau, dates this unleavened bread to 1300 AD.
The word Naan comes from the Persian word, non, for bread.
Generally Naan dough is leavened using Yeast or baking powder and baking soda.
Variations
Some popular variations of Naan are 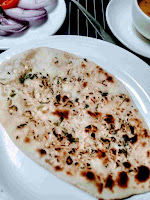 Ingredients
This Butter Naan Recipe uses ingredients such as
Time taken
Total time taken to make this butter naan recipe using tawa takes about just under 40 minutes. This includes twenty-five minutes of preparation time and ten minutes of cooking time. Talking of optional thing, this butter naan does not add any eggs, so it is entirely vegetarian.
Serving suggestions
Butter Naan is such a popular bread that it can  pair with anything quite easily. Almost all indian curries and gravies are excellent with butter Naan.
Butter chicken, paneer butter masala,   chicken tikka masala and chicken lababdar are few that are excellent to serve with this.
Some kababs like chicken tikka, chicken malai kabab, chicken reshmi kabab and chicken hariyali kabab are also good to have with a butter naan.

Now grease some oil and knead further to make it a non sticky. Cover and keep aside for ten minutes to set.

After that divide the dough into small equal parts and roll them between the palm of hands to make round shape balls. Keep the balls aside for five minutes to set.

Rolling
Take a dough ball and dust with some flour. Press the ball slightly with finger tips and start to roll with a roller pin.
First roll it in a small circular shape then roll in length wise around 5 to 6 inch long and 3 to 4 inch wide.

While rolling the naan dough ball, you can top it with some Nigella seeds and chopped coriander leaves.

Or sprinkle some chopped garlic to make garlic naan.

You can even give this butter naan a lachcha like shape by making pleats of the dough.

Cooking
For restaurant style butter naan in stove top, a heavy cast iron tawa is the best option to use.  A non stick pan wouldn't give you the same texture as of restaurant.
Heat a tawa over medium high heat flame. When it become hot, grease one side of the rolled naan dough with some water and place that side on the tawa. If possible apply some force while placing it on the tawa. It help to appear bubbles quickly. 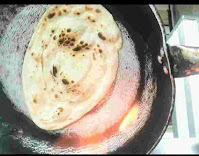 After that flip the tawa back on the gas stove and cook for another one minute.

The back of the butter will become crisp golden like restaurant style.

Remove and serve hot with your favourite chicken tikka masala.
You can also use a tong to roast the naan over the gas flame. When small bubbles appears on the naan, remove it from the tawa with a tong and cook  over the gas flame.
If you love this Naan Recipe then j am sure you would love more such bread recipes like
Gilafi naan 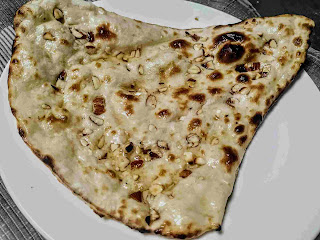 You can make a gilafi naan using the above naan dough. Before we proceed to make the gilafi naan recipe, let's first figure out what is gilafi in gilafi naan?
The tern gilaf means cover. And gilafi means covering. We need to cover anything to make gilaf or gilafi. Like we coverIng a pillow  or covering a sword. Similarly we need to cover the naan also. This is a Mughlai cuisines recipe like gilafi seekh kabab.
So to cover or gilaf the naan, nuts like pistachio or almond are used in gilafi naan recipe. So gilafi naan can define as a triangular shape naan cover or gilaf with chopped pistachios or almonds. 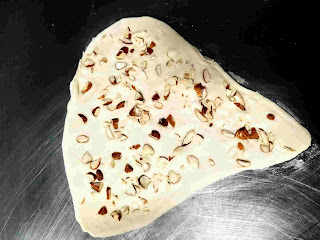 To make this naan first make some small round shape dough balls with the above naan dough. Then grease some oil or ghee over them and press gently and fold to make triangle shape dough.
Dust with flour and roll into a flat triangular shape naan like tawa paratha. Top this triangular naan with chopped pistachios and cover fully.
Now cook them like we cook our regular naan in a tandoor or tawa as shown above. Apply butter or ghee and serve gilafi naan. 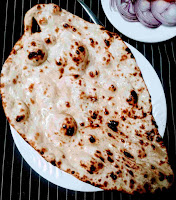