Learn how to make tandoori roti with step by steps photos and video. Tandoori roti recipe at home using stove top and tandoor.

Tandoori roti is every one's favorite and are loved by all foodies and cooking enthusiast. 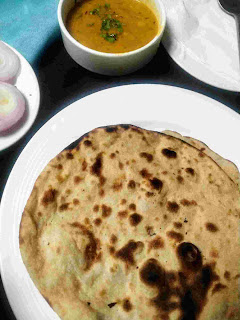 Tandoori roti are crisp from outside and soft from inside and are easy to make. And the  best part is, you don't even need a tandoor to make it. If you have been looking for a  easy tandoori roti recipe at home, then you have come to the right place. Here I bring you the step by step guide with photos and video on how to make tandoori roti at home.

I always prefer a tandoori roti over Naan. The best thing about this roti is that it is made with only wheat flour, salt and water.

At restaurants sometimes very little amount of maida is used in the dough to give  some elasticity.  As tandoori roti are flatten by the palm of hands at restaurant.

What is tandoori roti?

Before we jumped into the recipe, let us look at how nutritious and healthy tandoori roti is.It has plenty of complex carbohydrates and protein.

Total time taken to make tandoori roti take about just twenty five minutes. This includes fifteen minutes of preparation time and ten minutes of cooking time. This roti does not add any eggs so it entirely vegetarian. And without using any ghee or butter, you can make this tandoori roti Vegan. You can use vegetable oil to brush then after cooking.

Flour : This tandoori roti is made with only whole wheat flour, gehu atta. Use of maida is optional generally not used.

Oil : Use any good brand's vegetable oil like Sunflower oil.

Water : As required to knead the dough.

Ghee or butter : Use any good quality ghee or butter to brush the rotis after cooking. And for Vegan tandoori roti use vegetable oil.

Dal roti is the best combination for this. Dal tadka or dal fry is the most popular and preferred choice for tandoori roti.

Any other Indian gravies and curries like paneer butter masala, chicken kadai, butter chicken, bhindi masala are some good choice to serve with it.

Take a mixing bowl and add the wheat flour, salt and cooking oil. Give them a nice mix and then pour water little by little.

Start to knead everything and make a soft palpable dough.

Grease some oil over the dough and knead further for 1 minutes to make the dough smooth. 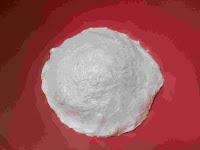 Cover and let the dough rest for 15 to 20 minutes to set.

While making tandoori roti at home on stove top using tawa, pan or griddle I only use salt, water and wheat flour to make the dough. Nothing else.

In some dhaba or hotels, baking soda is used only to cut the cost.

Take the rested dough and divide into small equal parts. Roll them in between the palm of hands to make round shaped dough balls. 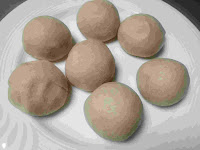 Now dust one dough ball with flour and lightly press and roll with a roller pin. Roll the dough ball according to the desired size of the roti generally 5 to 6 inch diameter. 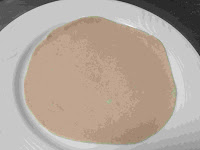 Heat a pan or tawa over medium heat flame. When it become hot enough lower the flame to low.

Brush some water on one side of  the rolled roti  and place that side on the tawa directly. Let it cook for around 30 seconds or till some small bubbles start to appear on the roti.

Now flip the tawa and place the top side of the roti over the gas flame. Increase the flame a little bit and cook the roti till crisp golden.

Then place the pan or tawa back on the stove top and cook for another 30 seconds.

Remove and serve hot. You can apply some butter or ghee over the roti before serving. It is best to use iron tawa for the recipe.

Similarly make roti with the rest of the dough balls and serve hot with curry or gravy.  This is how you can make tawa tandoori roti or tawa butter roti. And this is the best tandoori roti without curd.

Preheat an Oven to 250°C to 300°C for about 15 minutes. Leave a baking tray at the centre of the oven at the time of heating. The baking tray need to be hot enough to cook the underside of the roti.

After rolling the dough balls, bring the baking tray from the oven and place the rolled out rotis over the tray one by one depending on the size of the tray.

Now place the tray back inside the oven and cook for 8 to 10 minutes. When the top side become light brown with some brown spots, flip to check the other side is cooked. Remove the baking tray from the oven and serve the roti.

While the rotis are baking inside the Oven, you can roll more roti for the next batch as the baking tray will remain hot after the first batch.

To make tandoori roti in tandoor, you can use the same soft palpable dough.  The temperature of the tandoor should not be very high or low.

In a medium hot tandoor you can make soft and we'll cooked tandoori roti.

In restaurant rolling pin are not used to make tandoori roti or naan. The dough balls are first pressed lightly by the tips of fingers.

Then further flatten by using the palm of both hands.

Finger tips are greased with some oil before pressing the dough balls..

The flatten roti is then place over a roti pad (gaddi).

Now the roti is placed inside a preheated tandoor with the help of the pad. Allow the roti to get cooked till light brown and crisp.

Therefore remove the roti by using a pair of Shewer and serve. 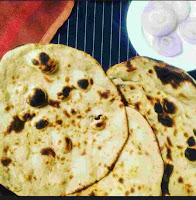 Tandoori roti with yeast is known as khameeri roti, which is very rare now a days.

It is a product of mughlai cuisine where yeast is used to ferment the dough to make soft and taste roti.

If you love the recipe of tandoori roti then you would love the following flatbread recipes as well. 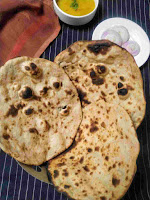 Tandoori roti is a unleavened indian flatbread made from whole wheat flour (atta). You can make this restaurant style tandoori roti recipe at home on stove top with a tawa. It is low in calories and almost zero fats.