Rumali roti recipe with step by step photos and video. Make super thin and soft rumali roti at home.
Traditionally rumali roti are made by flipping and stretching between two hands like hand tossed. Sometimes this rotis are spin in air also to get expanded 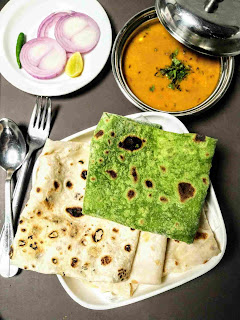 Rumali roti is a popular unleavened Indian flatbread. They are traditionally made in Awadhi, Mughlai and Hyderabadi cuisines. Rumali roti is very thin and soft. And roasted over an inverted tawa known as rumali tawa.

Rumali roti is very thin and folded like a handkerchief. The word Rumal means handkerchief in Hindi and it is believed to have originated during the Mughal Era, where it was used to wiped out excess grease from the hands after the end of a rich meal. In Punjab it is known as Lamboo roti and Dosti roti in Caribbean.

Basically you need only 4 ingredients to make a rumali roti, flour, water, salt and oil. You can add some milk to make it more nutritious while kneading the dough for a rumali roti.

Rumali is a versatile roti that can be served with thick curry and gravy. The best side dishes to serve it are seekh kabab and other tandoori delicacies.

They are enjoyed best with korma, nihari and rolls.

Plain rumali roti is the most popular one. Other variations are

For a perfect rumali roti the dough need to be smooth and soft. You need to knead the dough little bit more than regular chapati dough.

Take the flour in a mixing bowl. Add salt, oil and milk. Start to knead by pouring water as required. Make a soft and palpable dough. Apply some more oil and knead further. Cover the dough and keep aside for 15 to 20 minutes to set.

For making palak rumali roti, blanched some fresh spinach and make a fine puree. Mix this puree with flour, salt and oil. Then start to mix and knead. Pour water if required only while kneading. Grease oil and set aside to set.

Divide the dough into equal small parts and roll them between the palm of hands dusting with some flour. Make small round shape balls according to the size of the tawa to roast the roti.

If you have big inverted tawa or kadai you can make big size dough balls. Cover the dough balls and set aside for 10 to 15 minutes to set.

It is very important to set the dough balls first before you start to roll them. Unset dough balls wouldn't expand easily and the resulting rumali roti would be thick. And it may breakdown while hand tossing.

Take a dough and dust with some flour. Press lightly over it with finger tips and start to roll with a roller pin.

Roll it around 10 to 12 inch diameter round shape circle. Make sure the roti is very thin.

Hand tossed the rumali roti needs some good practices. You may not succeed at your first try and may break the roti but after some practices you would surely succeed to expand a rumali roti by your hands. Without hand tossed, you wouldn't get that perfect handkerchief like texture. 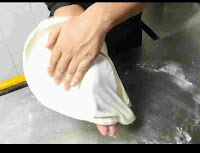 Flipping and stretching a rumali roti in air is comparatively quite easy than using hand.

What you need to do is after rolling the roti lift it and place over your right hand. Then move your hand upwards rotating the wrist clockwise as far as possible.

Now throw and spin the roti gently in air by rotating the wrist of your hand anti clockwise. 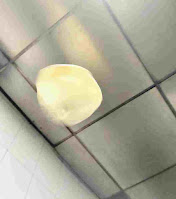 When the roti start to fall downwards gently place your right hand behind the fallen roti.

Similarly spin it again in air for further expansion.

When the roti expanded place it over a preheated inverted tawa or kadai.

Within few seconds small bubbles start to appear on the roti. Immediately flip the roti to another side and roast further.

Roast the roti from all sides. Fold it and remove from the tawa. Keep the heat flame to medium to medium high for a soft rumali roti.

Continue roasting rumali roti at high heat flame makes the tawa non sticky and then the roti start to slip. So salt water is used at a certain time over the tawa to hold the roti on it.

Generally rumali roti is roast on a iron tawa or rumali tawa. If you are using stainless tawa or kadai then apply some salt water.

In hotels, rumali roti is roasted over a rumali tawa and it comes  between 14 to 18 inches diameter in size. 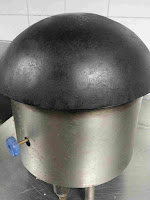 If you love this rumali roti recipe I am sure you would also love the following recipes as well. 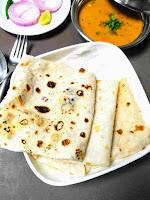 Rumali roti is a thin and soft unleavened bread, can be folded like a handkerchief. Best to serve with thick gravy and tandoori delicacies. Inverted tawa or kadai are used to roast them. 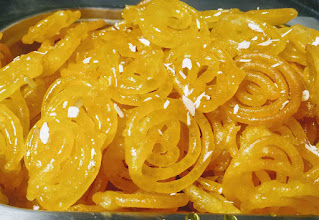