Fish Tikka is a very popular recipe for all fish lovers. This spicy fish tikka are marinated in a yoghurt based marination and then baked , roast or shallow fry till crisp golden. Fish Tikka are served as an appetizer or snacks with cilantro mint chutney, lemon wedges and onion slices.

But it can be paired excellent with a salads like green tossed salad, corn salad . But my favorite is brussel sprouts salad with fish tikka.


Fish Tikka recipe is very easy and with easily available ingredients you can make this recipe at home like a restaurant style.
Fish tikka is a popular, healthy and versatile recipe. This fish tikka recipe is easy and the best part is you don't even need a tandoor to make it like restaurants. If you have been looking for such a fish tikka recipe, you have come to the right place. Here I bring you the step by step guide on how to make tandoori fish tikka at home.

Tandoori fish Tikka recipe can be made by using an oven or on Tawa. To make this recipe all you need is boneless fish fillet. Fish can be of your choices.
What is fish tikka?
Fish tikka is a popular snacks or appetizer of boneless cube size pieces of fish marinated in a spiced curd based marination known as tandoori masala and roasted over open or charcoal fire.

Surmai fish is a popular fish in coastal region of India in state like Maharashtra, Goa and Banglore. With this Surmai you can make delicious fish tikka.  All you need to boneless a Surmai fish and make fillet.
Then cut the fillet into cube size pieces and marinated in tandoori masala for 4 to 5 hours. After that thread them into a shewers or wooden sticks and bake in Oven or roast on a tawa till crisp golden.  Like how we make surmai fry on tawa.
There are some popular fish tikka recipe that you can make easily at home. Some of them are as follow :-
Kasundi is a paste of mustard or Rai which is used to marinate the fish pieces along with some other spices.
Malai is a rich creamy sauce made by making cashew paste along with rich cream and cheese.
Hariyali fish tikka is a spicy fish tikka recipe where green herbs like cilantro, mint and spinach paste are used along with green chili.
This is popular Punjabi version of fish tikka where fish cubes are marinated with spicy red chilli powder, carom seeds and other spices. This fish tikka can be either deep fried or roast in  tandoor.

Chickpea flour( besan )  along with beaten egg is used to coat the fish cubes  for deep frying. Yoghurt is not used while deep frying them.

What is tandoori fish tikka?

Basically tandoori fish Tikka means that the fish is cooked in an oval shaped charcoal Tandoor.
But the term tandoori is also used to refer the  tandoori masala.

So a tandoori fish tikka means that the fish is either cooked using a tandoori masala or in an oval shape tandoor.

You can read the recipe of Tandoori Pomfret made using tandoori masala and cooked in tandoor.

Wash and clean the fish fillet and Pat them dry completely. Then trimmed and cut into cube size pieces.
Fish tikka marination
Marination not only helps the fish to become juicy but also soft from inside. The fish absorb all the flavours in marination period which makes it more taste and yummy. I always prefer two step marination while making tikka or any other kebab. This really increase the taste and flavour of the resulting dish.
First  mix the fish cubes with half of the red chilli powder, ginger garlic paste, lemon juice and salt in a mixing bowl.

Apply 1/2 teaspoon oil and mix nicely. Let them marinate for about 10 minutes.

Add the remaining oil and whisk everything to make a thick batter like masala.This masala is also known as tandoori masala used to cook tandoori dishes.

Now mix the fish cubes with this tandoori masala and keep refrigerated for 3 to 4 hours or overnight.

MakIng the fish Tikka
Preheat the oven and place a silver foil in a baking tray. If using wooden shewers then pre soaked them in water for 30 minutes.

Now start threading the fish in shewers. If using vegetables like onion and bell pepper cubes then thread them alternatively with the fish.

Place the shewers over the baking tray and bake for 10 minutes.

Remove and flip them. Brush oil over the fishes and bake again for another 5 minutes till crisp golden.

Remove them from the shewers and serve hot along with mint chutney.

Fish Tikka recipe on Tawa
Take a thick heavy iron skillet and heat in high flame adding 2 teaspoon oil for 1 minute. Discard the excess marination from the fish. Slow the flame to low and place the fish pieces carefully on tawa. 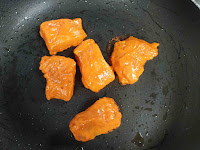 Roast them for 2 minutes and then flip and cook for another 2 minutes. 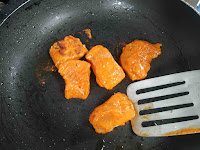 Cook them for 6 - 7 minutes till crisp golden by flipping at some interval. 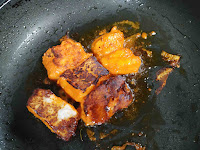 You can read how to make Chicken Tikka masala recipe for better understanding.


Fish Tikka is a popular fish recipe served as an appetizer or snacks. Cubes size boneless fish are marinated in a spicy marination and then Shewers and cooked either in an oven or on Tawa. Traditionally fish Tikka are cooked in tandoor and called tandoori fish tikka.

Serving size 250 g
Serving tips
Recipe notes
Love seafood recipe then read and make  following recipe and enjoy with your family and friends
If you love fish tikka recipe on Tawa then I am sure you would love the recipe of chicken tikka on tawa  and
Hariyali kabab in pan as well.