If you love kabab and tikka the way served at restaurant then this guide will help you to make the best angara kabab at home.

Kababs are more popular in most parts of the globe. Angara kabab is one of such popular chicken kabab which is spicy, juicy and succulent. It is for all the foodies who loves some extra hot and spicy kabab.

Chicken Angara kabab is a modified version of popular chicken tikka. Here some extra spices are used to make the kabab more spicy than chicken tikka. This kabab is cooked over charcoal in a clay oven tandoor till become crisp golden. The term Angara is a Sanskrit word which means burning charcoal. So this kabab is called as Angara kabab means it is made and cooked using burning charcoal. Cooking food items over charcoal fire gives an extra smoky flavor which is a plus point for this kabab. At home it is not possible in oven or stove top. So you can use the traditional Dhungar method to give the smoke flavor. 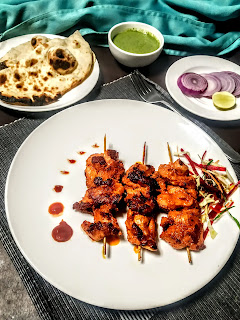 Chicken Angara kabab is red in color due to the uses of Kashmiri red chilly paste. Herbs like ginger, garlic and green chilli gives it the extra hot spicy flavor. Green chutney is the dip for this kabab and can be served over a hot sizzler plate.

Here I bring you the step by step guide on how to make chicken Angara kabab like restaurant style with photos and video.

Angara kabab is a spicy and hot chicken kabab traditionally roast and cook over burning charcoal. It is a spicy version of chicken tikka made with a spiced yogurt based marination with Kashmiri red chilli paste and other spices. This is chicken Angara dry recipe, there is also a gravy version of the Angara chicken.

Traditionally chicken Angara kabab is cooked in a charcoal tandoor till become crisp golden. Chicken leg boneless are generally used to make this kabab which makes it juicy and tender.

Time required to make it

The total time taken to make this delicious kabab is under 30 minutes, which includes the preparation time of 15 minutes and cooking time of 15 minutes. Here I have excluded the marination period time which may vary from 2 to 4 hours or overnight.

What to serve with this kabab

Chicken Angara kabab is best to serve with restaurant style green chutney. Serve some fresh onion slices or lachcha onions along with a lemon wedges. You can serve a fresh salad and butter naan with this kabab for complete satisfying meal. You can even serve it as a side dish with chicken briyani or other flavoured rice. Squeeze some lemon juice and sprinkle some chat masala over the kabab before serving.

What to do with the leftover Angara kabab

If you have some leftover kebabs then don't worry for that. You can use them to make plenty of other delicious recipes to enjoy.

You can keep the leftover kebabs in freezer for upto 5 to 7 days by storing them in a air sealed container. Before using microwave then for 2 minutes.

There are so many dishes can be made with the leftover Angara kababs. Like you can use them next day to make chicken tikka masala or murgh makhani ( butter chicken).

You can use them to make some salad or use them as pizza toppings.

1. Chicken  : it is best to make with leg boneless which makes it juicy and tender. You can use chicken breasts as well but take care while cooking because breasts often become dry  while cooking.

2. Kashmiri red chilli paste :  it not only gives the kabab the required red color appearance but also makes the marination paste smooth. You can boil the whole Kashmiri chilli and grind them to make the paste

4. Lemon juice : a very important ingredient which helps to make the kabab juicy.

5. Yoghurt : thick or overnight hung curd is best to use for the marination.

8. Oil : you can either use cooking oil or mustard oil or a mix of both. Mustard oil has high smoking point which help the kabab not to get burnt quickly while cooking.

First you need to trim any excess fats present then cut the chicken pieces into small bite size cubes. In a mixing bowl add the chicken with half teaspoon red chilli powder, half teaspoon ginger garlic paste, lemon juice and a small pinch of salt. Add one tablespoon cooking oil and mix everything nicely. Cover and keep marinated for 15 to 20 minutes. This step help the chicken to absorb salt and chilli. And also make the kabab more juicy. 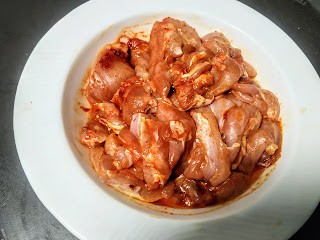 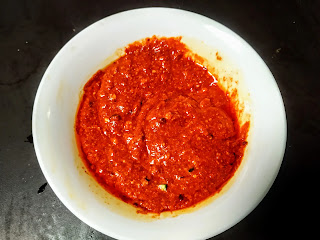 The longer you keep the chicken marinated in second marination the better you get the result. Three to four hours is the minimum period if you want your kabab to be juicy, succulent and tender. Overnight marination period always yields best kababs.

Now bring the first marinated chicken and pour the above prepared Angara masala paste. Mix them from all sides so that the chicken pieces are nicely coated with the masala paste. Cover and keep marinated for overnight. 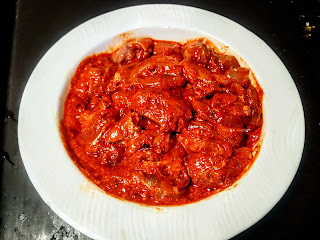 You can cook Angara kabab either in oven or using a pan or tawa. In restaurant they are cooked over charcoal fire in a tandoor. Long iron Shewers are used to thread the marinated chicken pieces. Small size shewers or wooden sticks can also be used to cook them in oven or tawa. If you are using wooden sticks then soaked them in water for thirty minutes before threading them. This will help the sticks not to get burnt while cooking.

Preheat an Oven at 240°C for fifteen minutes and line a baking tray with aluminium foil. Bring the marinated chicken and start to thread either in wooden sticks or small iron shewers. While threading keep a minimum gap between the chicken and thread four to five pieces per shewers. Now place them over the baking tray. 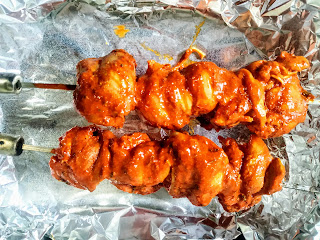 Similarly you can make Angara kabab without tandoor on a tawa. For that heat a tawa with some oil in high flame heat. When the oil become hot lower the gas flame to low and place the chicken sticks on the tawa carefully. 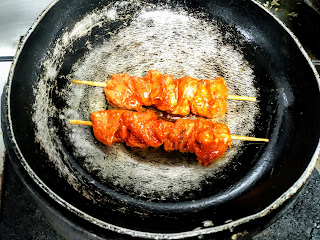 Cook them in this way till become golden brown and crisp. It would take around 7 to 8 minutes to completely cook the kababs.

While cooking them in a tandoor, long size iron shewers are used to thread the chicken pieces. They are then placed inside a preheated charcoal tandoor.  Cook for 8 to 10 minutes or till they are crisp golden and charred. While cooking rotate the shewers inside the tandoor and brush some butter over them. Angara kebab on charcoal in a tandoor or bbq grill brings the best flavor. They become crisp, juicy and tender.

Smoky flavour for Angara kabab at home
At home it is not possible to achieve the same taste and flavour for Angara kabab like restaurant. You need a tandoor to get that smoky flavour. But there is an ancient technique called Dhungar, which can be used fto get the smoky flavour. In this technique small burning charcoal are placed in a small bowl which is then placed at the centre of the marinated meats. Ghee or butter is poured over the charcoal and when smoke start to appear, cover the whole utensil with a lid so that the smoke can not pass out. Keep them aside for one hour or more to infuse the smoky flavor in the marinated meats.
This Dhungar method is widely used to make mutton galouti kebab.

If you love chicken Angara kabab then I am sure you would love the following kabab recipes as well.

FAQ
1. Can I use the Angara kabab masala paste to make paneer Angara kabab?
Angara kabab masala can be used to marinate paneer also. You can make spicy paneer Angara kabab with the above step by step method, just replace chicken with paneer.
2. Can I use cooking oil instead of mustard oil for Angara kabab?
Yes sure. You can use cooking oil or olive oil instead of mustard oil. See mustard oil has a high smoking point so when we cook the kababs on open fire or over charcoal fire, the kababs wouldn't get burnt quickly and they get cooked for longer period.
3. Do I need to use cashew nuts paste or almond paste or gram flour (besan ) in the marination for chicken Angara kabab?
Cashew nuts paste or almond paste can make the marination smooth and  help to coat the chicken pieces nicely. Similarly gram flour also help to bind the marination with the chicken. But in authentic chicken Angara recipe, these ingredients are not used. If you are using hung curd and Kashmiri red chilly paste, your marination would naturally become smooth and easily bind with the chicken. If you don't have hung curd or chilly paste then you can use them. 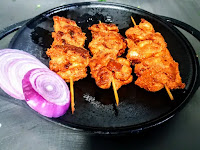 Chicken Angara kabab or murgh Angara kabab is a spicy and hot kabab made with boneless chicken marinated in a spiced yogurt based marination with herbs and spices.