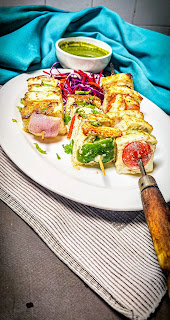 What is malai paneer tikka?

Malai paneer tikka or paneer malai tikka is a creamy and mild in taste paneer tikka made by using a creamy yoghurt based marination with vegetables like capsicum, onion, bell peppers and tomato. Marinated paneer cubes are grilled or roasted with vegetables over charcoal fire till crisp golden.

The total time taken to make the malai paneer tikka is under 20 minutes which includes the preparation time of 10 minutes and cooking time of 10 minutes. If you cook in tandoor or pan then it take less than 15 minutes. Marination period is excluded here which is around 30 minutes to one hour.

What to serve with it ?

Green chutney is the best dip for this tikka as well. You can serve some lachcha onion along with green chutney with malai paneer tikka. Some fresh salads and tomato sauce can also be served as a side dish with this.

What to do with leftover malai paneer tikka?

You don't have to worry for the leftover tikka. You can refrigerated them in a air sealed container for upto 24 hours or more. Next day microwave then for 2 to 3 minutes and brush some melted butter and sprinkle chat masala before serving them. You can even use them as pizza toppings or use to make malai paneer tikka roll or wraps. Use them in rich creamy curry or gravy to make dishes like Shahi paneer or makhmali paneer.

If you love malai paneer tikka recipe then I am sure you would love the recipe of chicken malai tikka as well.

You can make the malai tikka masala marination in advance and keep refrigerated for upto three days in a air sealed container. Before cooking just cut the paneer and vegetables apply salt and pepper and marinate with this masala. Leave for 10 to 15 minutes to absorb the flavours. Similarly you can keep the marinated paneer for upto two days in a fridge.

This is the first step to make any paneer tikka. You need to cut paneer and the vegetables in cube shape so that you can nicely arrange them to fit in a paneer tikka stick or shewer.

First wash the paneer block nicely under water for one time. Then with a sharp knife cut it into small half inch width cubes. 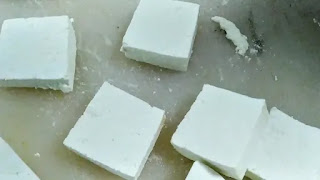 Similarly cut the onion, capsicum, bell pepper and tomato into small cubes like the paneer cubes. This paneer tikka vegetables are collectively known as shashlik. 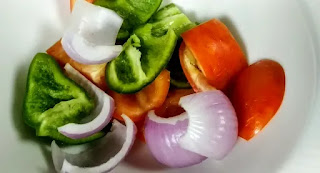 To make the paneer even more taste and flavourful add a small pinch of black pepper powder and chat masala and nicely mix with the paneer cubes. Keep them aside to absorb the flavour. 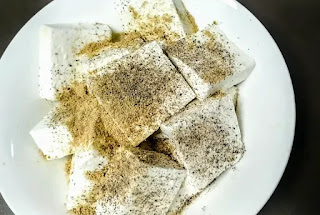 Malai masala is mild, rich and creamy. Most of the Indian grocery spices are not generally used to make this masala paste. To make masala first take the curd in a mixing bowl and add cashew nuts paste, grated cheese, fresh cream and green cardamom powder.

Add the paneer and the vegetables in malai masala paste and mix carefully. Make sure all the paneer cubes get coated evenly from all sides. Cover and keep them aside for minimum one hour or more to marinate and absorb all the flavours. 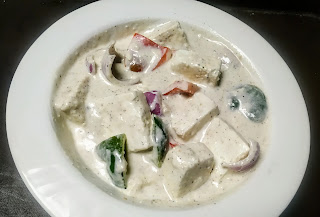 Traditionally malai paneer are cooked in a charcoal tandoor but can be made in Oven or pan also.

After the marination period is over bring them and start to cook either in oven, pan or tandoor. You can use paneer tikka sticks  to thread the paneer and the vegetables or small iron shewers. If using wooden sticks then soak them in water for about thirty minutes.

While threading the paneer use any one of the shashlik cube and thread in between the paneer pieces. 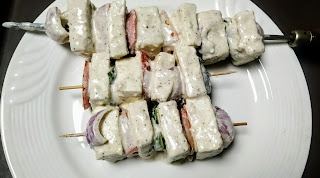 Place the threaded paneer sticks on a baking tray and brush with some butter over the paneer. Now place the tray inside a preheated oven and bake for 8 to 10 minutes or until the paneer become crisp golden. Remove them and place on a plate. 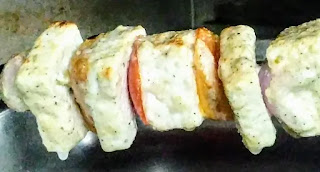 Sprinkle some chat masala and coriander leaves and serve hot with green chutney.

If you want to make malai paneer tikka on pan then don't add the grated cheese in the marination as the melted cheese get stuck on the pan while cooking.

Heat a pan over medium heat flame gas with one tablespoon oil. When become hot lower the heat flame to low and place the paneer sticks carefully on the pan.

Cook for two minutes or until that side become charred. Rotate the sticks and cook them from all sides till become crisp golden. 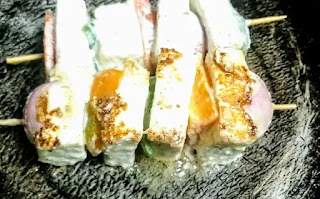 While cooking them on the pan, the paneer would release some moisture along with the marination. So don't get nervous. Cook them untill all the moisture evaporated and the paneer become dry.

To cook them in a preheated charcoal tandoor you need long size iron shewers to thread the marinated paneer and the vegetables. Thread the paneer and vegetables alternatively one after q. And at the end thread half of a potato so that the paneer won't fall from the shewers when get cooked inside the tandoor.

Now place the shewers inside the tandoor and cook till crisp golden. It will take around 6 to 8 minutes in a medium hot tandoor to cook the malai paneer.