How to make paneer butter masala

Paneer butter masala or butter paneer masala is a rich creamy vegetarian dish of paneer in tomato onion based gravy or sauce. Lots of butter is used to temper it.
Paneer  known as cottage cheese is the  most loved food item in Indian subcontinent.
Almost every section of society love paneer and dishes made from it. Paneer butter masala is one of such popular paneer dishes for dinner.
Restaurant style paneer butter masala
In restaurants melon seeds are used along with cashewnuts while making the tomato onion puree or gravy. Dry kasoori methi is another important ingredient.
You can boil tomatoes along with some whole spices, cashewnuts and melon seeds till soft and messy. Cool down and discard the whole spices. Make a fine puree of them. Or saute the tomatoes with the spices and then make the puree.
Heat butter with little oil and fry chopped garlic and cumin seeds till cracks. Add chopped onions and fry till light brown. Then add red chilli powder, turmeric powder and coriander powder and cook for few seconds. Pour the puree and further cook along with little water. Add the paneer pieces, fresh cream, fenugreek leaves, salt, butter and a small pinch of sugar. Taste and remove. Serve topping with fresh cream and butter.
Making paneer at home
Paneer is a fresh cheese prepared by adding lemon juice or vinegar in hot milk to separate the curds from the whey. The curds are then drained using a muslin cloth and kept hanging to press out excess water from it.
The resulting paneer is then dipped into chilled water for 2-3 hours or kept in a block by pressing to improve its texture and appearance.
Tips to make better paneer butter masala

Vegan tips
How can you make paneer butter masala vegan?  You can simply make it vegan by the following methods

Preparation
1. First we need to make the gravy.  For that take a pan and add 1/2 teaspoon of cooking oil and  butter cube in slow flame. Saute the ginger garlic paste till raw smell goes off. Then fry the whole spices for few seconds or till the aromatic flavour released.
2. Add the onion slices and sauteed for 2-3 minutes in medium to high flame till the onions become translucent and light brown in colour.
3. Now add the tomato slices and mix well. Cook for more 2 minutes or till the tomatoes become soft . Add 1/ 2 teaspoon of red chilli powder and cook for 30 seconds. You can add the cashew nuts and melon seeds (if using) and fry . Or mix them when making the puree.
4. Turn off the flame and transfer the mixture into a bowl. Let the mixture to cool down completely. Discard the whole spices and make a fine puree using a grinder or blender.  Add little water to make the paste. Keep the paste aside to use later.
Making paneer butter masala
5. Cut the paneer into small cube size pieces.
6. Take a pan or kadai and heat  1/2 teaspoon butter with 1/2 teaspoon cooking oil in low flame . Don't heat the butter alone otherwise it will get burnt.Always use butter with oil for cooking purpose.
7. Add chopped garlic and  cumin seeds and saute then add chopped onions and fry till onion become light brown.
8. Add the red chilli powder , Coriander powder, turmeric powder and stir for few seconds. Pour little water and cook for another 30 seconds.
9. Now add the prepared onion tomato puree ( paste) into the pan and cook for 2-3 minutes or till it become thick.
For a good colour, you can add little bit more Kashmiri chilly powder. Don't worry it is not that hot . It gives a nice red colour only. Mix well and cook for a minute.
Add water to make desired gravy consistency. Let it boil and simmer for 2-3 more minutes on low flame heat.
10. Add the paneer pieces and mix gently. Cook for 1 minutes. Then pour the fresh cream and mix well. Sprinkle the dry fenugreek (kasoori Methi) to the gravy. Do crush the fenugreek in between your palm for  better flavour. Stir well.

11. Add salt as per taste and check the seasoning of the gravy and add a small pinch of sugar to balance the taste if necessary.
12. Transfer the paneer butter masala into a serving bowl and garnish with 1/2 teaspoon of cream and top with 1/2 teaspoon of butter and few coriander or Cilantro leafs.

>
Nutritional value
Serving tips
•  It is one of the best paneer recipe for roti.
•  Paneer butter masala can be serve well  with phulka and chapatis.
•  You can have it with tandoori naan or rotis as well. I personally prefer it with butter naan .
•  Steam basmati rice or jeera rice is another options for serving paneer butter masala. 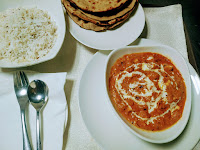