Parathas are everyone's favorite. And aloo paratha is especially for all the foodies and cooking enthusiasts.
Aloo paratha is versatile, yummy and extremely easy to make at home. If you have been looking for such a aloo paratha recipe, you have come to the right place. Here I bring you the step by step guide on how to make Aloo paratha at home with easy method.
What is aloo paratha?
Aloo paratha is a dish from Indian subcontinent and is widely used in morning breakfast and lunch boxes. Very popular in Punjab and often treated as Punjabi aloo paratha. Aloo paratha is a stuffed flat bread where outer layer is made using whole wheat flour ( atta) and the stuffing is made with spiced potato (aloo) fillings.
Boiled potatoes are finely grated or mashed and then mixed with spices like chilli, salt, turmeric powder, cumin powder and other spices. This potato fillings is then stuffed inside a wheat flour dough. Rolled and cooked with ghee or butter till crisp golden brown.
Ingredients required
Potato : 3 to 4 medium size potatoes nicely boiled, peeled and mashed.
Flour : 1 cup Whole wheat flour ( atta)
Herbs : fresh coriander leaves, green chili and onion.
Spices : Turmeric powder, red chilli powder, cumin powder and chat masala. Small pinch of kitchen king masala powder or maggi masala powder.
Salt : small pinch or as per taste. Amchur powder can give you the little bit tangy flavor.
Other  : Pure ghee or butter and cooking oil.
Serving suggestions
Side dish for Aloo paratha
Variations
Aloo paratha is generally made as a stuffed paratha. But can be made without stuffing as well by making a dough with the spiced mashed potatoes and flour.
Other popular variations are aloo onion paratha and aloo paneer paratha.
Calories in aloo paratha
One aloo paratha can give you around 177 calories. Out of which carbohydrate comprise 90 calories, protein around for 13 calories and the rest of the calories come from fats around 74 calories.
How to boil potato for aloo paratha
It is easy to  boil potato in a pressure cooker. Just put the potatoes inside the cooker and add water so they are submerged in the water. Cook for 3 whistles on high flame.
Let the pressure go down by itself then open the lid and remove the potatoes and let them cool down to touch.  Peel and mashed or grate them.
If not using pressure cooker then take a deep vessel pod and place the potatoes. Add water so that the potato submerged in the water and cook for 40 minutes in medium flame. Check the potato using a fork or tooth pick

Grease oil over the dough and keep covered to rest for 10 minutes to set.

Filling making
You can make two types of fillings or masala to stuff a aloo paratha.
First filling
Peel the boiled potatoes and mashed in a mixing bowl. It is better to grate the potatoes to avoid big chunks which may cause breaking the paratha while rolling.
Add chopped onions, chopped chilli, turmeric powder, cumin powder, chat masala, Cilantro leafs and salt. Mix them well. Taste the seasoning of the mixture. If required add some more spices.

Chat masala is sufficient for the Tangy flavour of the paratha . You don't need to add amchur powder or lemon juice. This is the popular fillings for a aloo paratha.
For second type of fillings
Heat half tablespoon oil in a pan. When the oil become hot add chopped or slice onions and few curry leaves. Fry them for one minute. Then add grated potatoes,  chilli, turmeric powder, cumin powder,chat masala and salt. Mix everything nicely so that the potatoes get nicely mixed with the spices. Switch off the flame and remove the potato fillings in a  the bowl. And allow to cool down completely. 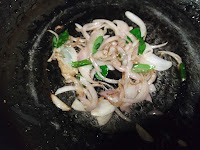 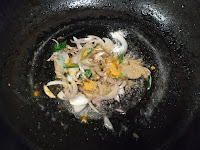 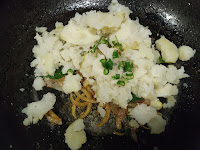 Curry leaves gives a nice aromatic flavour to the paratha.  This types of aloo paratha fillings is very popular in Maharashtra and  other southern regions of India.  This is homestyle recipe for aloo paratha in these regions.
Rolling the paratha
Divide the dough into equal small parts and make round shape balls rolling between the palm of hands.

Similarly divide the potato mixture into equal size balls. Keep their size quite big as more stuffing make better and tasty aloo paratha.
Now take one dough ball and dip in flour and roll into 3 - 4 inch diameter using a roller pin and board.
Put one potato mixture ball on centre and gather the edges. Pinch them to centre and sealed properly.

Again dust the stuffed dough with some flour and roll into a 6 inch diameter paratha.

If there is a small breaking while rolling the paratha then don't worry . Just dust or place some dry flour in that part and start to roll again.
Cooking the paratha
Heat a non stick pan or tawa in medium flame. When hot place the rolled paratha on it and cook for few seconds.

Flip the paratha , you can see some brown cooking spot on the paratha. Cook the other side for another few seconds.

Flip again and apply some oil on the surface of the paratha. Repeat with the other side of the paratha as well.
When the paratha become crisp golden on both sides remove from the pan in a serving plate and serve hot.
You can serve the paratha by  cutting into four pieces and garnished with tomato ketchup and mint Chutney.

Soft aloo paratha
How to make soft aloo paratha is a question often comes in our mind while making a alu paratha. There are some simple tips you can follow to make a soft aloo paratha
Aloo paratha for kids
Aloo paratha is a good healthy diet for kids.
Aloo paratha contains potato which is easy to  digest and provides energy to kids
Aloo paratha provides high amount of carbohydrate which is ideal for weight gains for kids.
Potato contains minerals like potassium, calcium, magnesium, phosphorus, sodium and iron which are essential for overall growth of your kids. While making aloo paratha for kids don't add chilli and garam masala in the potato mixture. Add some mashed vegetables like beans, carrot to make it more nutritious for your babies.
You can even give your kids aloo paratha in their tiffin box for school.
Whole wheat flour contains high amount of protein and fiber which are very important for kids overall physical growth .
Aloo paratha without breaking
Reasons for breaking
To avoid breaking the paratha,  mashed the potatoes smoothly so that there is no big chunks in  mixture. It is better to grate the potatoes finely for the stuffing  instead of mashing. Chopped the Cilantro, chilli and onion very finely to avoid breaking.
Dough play an important part while making a good and perfect aloo paratha. Knead the dough mixture 2 - 3 times  to achieve elasticity texture. Keep the dough mixture texture medium smooth.
Is aloo paratha healthy
Yes aloo paratha is healthy if we use whole wheat flour for making the dough. Or use multi grain flour (atta). A aloo paratha without oil is healthy. Like a aloo paratha cooked in tandoor is healthy.
If you are trying to weight loss then a aloo paratha in not idle option for you. It contains high amount of calories. Aloo paratha is a good option for those who want to gain weight.
If you love the recipe of aloo paratha then I am sure you would love the recipe of
Is aloo paratha vegan
You can make aloo paratha totally vegan by using vegetable cooking oil instead of ghee.
Even without using any oil can make your aloo paratha complete vegan recipe.
You can also read some of the best cooking recipes from below 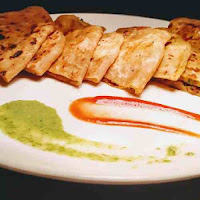 You can also check some of best recipe