Paneer tikka is a popular snacks or appetizer made by marinating paneer cubes with tandoori masala. Learn to make paneer tikka recipe at home with step by steps instructions and a video. 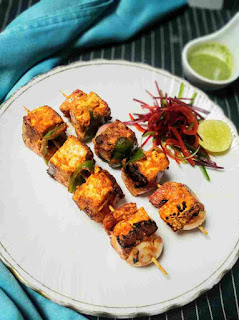 Paneer Tikka is a vegetarian  dish from Indian cuisine which is very popular around the globe.
Paneer tikka is versatile, yummy and extremely easy to make at home. And the best part is you don't even need an Oven or tandoor. If you have been looking for such a paneer tikka recipe at home, you have come to the right place. Here I bring you the step by step guide on how to make paneer tikka at home on tawa, in Oven and tandoor.
Paneer also known as Indian cottage cheese is a milk based product. You can easily made it at home by curdling milk with vinegar.
What is paneer Tikka
Paneer Tikka is a dish made by marinating cube of paneer in a spiced yoghurt based marination and then grilled or roast in a charcoal tandoor or oven till crisp golden.
Paneer tikka ingredients
1. Paneer : It is best to malai paneer for this recipe, they are soft. You can even use a homemade paneer also.
2. Yoghurt (curd) : Use hung curd to make the marination.
3. Vegetables : Onion, capsicum and tomato are most common vegetables. Red and yellow bell peppers also are a good choice. Cut them in cube size.
4. Spice powder : Red chilli powder, cumin powder and garam masala powder are basic spice powder used in the marination.
5. Other ingredients : Ginger garlic paste, lemon juice chat masala and salt.
6. Oil : Mustard oil is generally used in restaurants. Olive oil or other vegetable oil can be used.
7. Red chilly paste : A key ingredients for making paneer tikka looks red and glossy. Kashmir chilly paste is the most preferred choice. If not available use kashmiri chilly powder.
Serving suggestions
Paneer tikka is served with Cilantro mint sauce ( green chutney), onion slices and lemon wedges. Paneer tikka is a dry preparation and  work best as an appetizer or  starter.
Side dishes like green chutney, onion slices and a lemon wedges will go along with paneer tikka dry in a restaurant serving plate.
You can make a wrap or roll with this  paneer tikka to serve as paneer kathi roll. Use as pizza topping to make tandoori cottage cheese pizza.
Paneer tikka can be made at home using an Oven and on a tawa or pan . You can even make them over a BBQ grill.

Paneer tikka marination
It is very important to marinade the paneer first.  I personally recommend to follow a two step marination for the best paneer tikka recipe.
Cut the paneer and bell peppers into  1 inch long cube size pieces and keep aside. Similarly cut the onion into cube size.


First marination
Mix half of the red chilli powder (or cayenne pepper), chat masala and salt with the paneer cubes and keep aside for 15 minutes. Paneer cubes will absorb the flavours by this process.

Now mix the first marinated paneer cubes  and the vegetables with this second marination or tandoori masala and refrigerated for 1 hour or overnight.
Easy Tandoori masala Recipe

Take the marinated paneer cubes and remove excess marination from them.
Then line the paneer cubes with bell peppers and onion alternatively in wooden sticks.

Take a pan or tawa and grease with few drops of cooking oil and heat in medium flame fire for one minute. When the tawa become hot lower the flame to low.
Now place the paneer shewers on the pan and grill or roast on medium flame heat.
When the paneer become little bit charred, flip them to another side and futher roast them till the other side become charred.
Cook them by flipping occasionally from all sides for 7 - 8 minutes.


The paneer will start to release water with the marination. So don't get panic at this  stage. Just slow the flame and cook untill all the marination become dry and we'll coated with the paneer.

Switch off the flame and remove the paneer shewers from tawa and serve hot with green chutney.

How to make Paneer tikka in Oven
Preheat the oven to 240 degree celcius for 15 minutes. If using wooden sticks then soaked them in water for 30 minutes before using.
Line the paneer with the onion and bell peppers alternatively in the sticks.
Line a roasting pan with aluminum foil and place the Shewers on it and bake for 15 minutes, turning half way once.  You can even place a rack on the baking tray and place the Shewers on it.
When the paneer become crisp golden slight charred remove the roasting pan with the Shewersr out of the oven.
Arranged them in a serving plate and serve hot along with  mint chutney,  onion slices and lemon wedges. Sprinkle some chopped cilantro leaves and chat masala over them before serving.

Paneer tikka in tandoor
Bring the marinated paneer out of the fridge and keep in room temperature.Take a iron Shewers and thread the paneer cubes with the bell peppers and onion alternatively one by one.


Now put the Shewer inside the preheated tandoor or BBQ and cook for 7 - 8 minutes.

While cooking the  paneer, rotate the Shewers occasionally to cook them from all side evenly. When it get light golden and charred remove the Shewers from tandoor and keep aside for one minute.
The paneer tikka will release excess watery marination. Again put it inside the Tandoor for about half a minute to make hot.
Therefore remove the Shewers from tandoor and  carefully remove the paneer tikka with the vegetables  from the Shewers in a plate.
Sprinkling some chopped Cilantro and chat masala on them and serve hot with green chutney.
You can make it in BBQ as well by using the same steps.  We used the same marinated paneer for BBQ.
Tips for making best paneer tikka
Popular recipes
Paneer tikka without shewer
Alternatively you can roast them without lining or threading in Shewers or wooden sticks. Use any good non stick pan or heavy iron cast tawa to roast or grill them.
If using tawa then first heat it with some cooking oil for 1 or two minutes in high flame heat. Befor adding the marinated paneer with vegetables lower the flame to low.
When one side become charred flip to another side and continue. Cook them from all sides till become light brown and crisp.
Paneer Seekh Kebab  can also be made using a pan or tawa.

Paneer tikka without curd
You can avoid to use curd in the marination to make paneer tikka as well. While making the second marination above,  avoid the curd and add half tablespoon of besan with other ingredients. In place of curd you can use fresh cream as well. Add some more lemon juice or vinegar in the marination. If the marination get quickly burnt while cooking then apply some more oil and then cook further.
Paneer Tikka is mainly served as an appetizer or snacks but can be used to prepare some  popular recipes like.. ...

Paneer releases more moisture while cooking and that makes the resulting paneer tikka less taste. So use two marination.

Cubes of paneer and vegetables are marinated in a spiced yoghurt based masala known as tandoori masala and thread in wooden sticks or iron Shewers alternatively. Then grilled or roasted over a pan or tawa or in a oven or charcoal Tandoor till crisp golden. Serve with cilantro mint chutney.
Prep time     cooking time    serving
10 min            10 min                    2
Author : Mobasir hassan
Ingredients

How to make the recipe
Making paneer tikka

SERVING TIPS
Paneer Tikka is generally served as an appetizer or snacks with Cilantro mint sauce or green chutney along with slice onions and lemon wedges. It is also goes well as a side dish with rice and Dal. You can even have a butter Naan or tandoori garlic Naan with a paneer Tikka.
RECIPE NOTES
Popular paneer recipes you can make at home.....